The Action Man Horse was a very authentic looking mount for Action Man from 1972. Sculpted by Palitoy's Bill Pugh, it was the perfect accompaniment for a few figures, not only the obvious Household Cavalry (Life Guard and Blues & Royals), but also the 17th / 21st Lancer, Royal Canadian Mounted Policeman, Cowboy, 7th Cavalry and Indian Brave. It was a popular choice with girls too, as it had a realistic mane and tail hair - much more detailed than many horses aimed at the girl's dolls market of the time. A separate set named 'Full Parade Accoutrement' was also made to complement the basic horse. First edition horses were initially only available in black, but by in 1977 a brown horse with matching mane and tail hair version was added. The Horse came in four main combinations of tack and packaging:

The Action Man Horse is molded in two halves and bonded together. The original 1970s horse has a visible seam along the back, whereas the 40th Anniversary reissues (dating from 2006) have no visible top seam and appears as one. Both undersides have a visible seam. The tack is easily damaged, especially the 'girth' under-strap locating buckles which are not robust. Also the dress horse's 'bit' in chromed plastic is delicate. Finding an undamaged and complete horse is becoming a challenge. The 40th version is an almost identical copy, however, the back seam, and the slightly more defined and white head 'star and strip' on the horse's forehead helps differentiate the two. The original horse's seam can come apart as the glue deteriorates. The 'Horse with Dress Saddle' box illustration is very similar to the simpler version of 'Horse with Saddle' box - with the Life Guard edited out and stables re-imagined, leaving the Army Officer as focal point. The two 1977 'Wild West' themed Horses have the same box, but with differing over-stickers, denoting whether a 'Cavalry Charger' or 'Indian Pony' was contained within. It is estimated that the brown horse is rarer by a ratio of perhaps 15:1. Judging by the box illustration, it's likely that the intention was for Palitoy to produce two versions - a brown 'Indian Pony' - possibly with different tack (such as fleece saddle pad), and a Black Cavalry Charger (with familiar tack as before). This idea would warrant the over-sticker for the differing contents, otherwise, why bother producing another sticker. With time, and lack of clear untampered evidence it is unclear whether Palitoy swapped and substituted (with what came to hand) whilst packing these boxes as noted with other accessories from time to time. Evidence suggests at least some of the brown horses got into the Cavalry Charger boxes with brown tack. We cannot find clean reference of the Indian Pony version of the box but it has a catalogue number of 34453. A very similar looking leg jointed 'Rachel' Horse was produced by Zodiac (Toys) Ltd (states so on the underside). A Palitoy 'Action Girl' 'Pony Rider' Horse using the same mould was also produced with brown tack, grooming accessories, a card stable and even a rosette!

"We needed a horse to compliment the Life Guards and Blues and Royals. My boss Bill Pugh and I visited the Household Cavalry barracks in Whitehall and we were entertained by the commanding officer in the officers’ mess. I took loads of photos of the uniforms and also of the horses and the accoutrements for the horse. Back at Coalville, with a complete uniform we borrowed, I did all the design work and model-making for the uniforms and the accoutrements. So you can blame me for the parts being so delicate. One day Bill came into are office and ask for some clay. He came back after the weekend and brought in a perfect clay sculpting of the horse he had done himself. I believe my colleague Stuart Moore, who was probably a bit miffed for not getting the chance to sculpt it, took plaster castings from the clay to send to the toolmaker. Stuart was the doll designer and sculpted products like Tiny Tears.

I am not sure who made the tools for the two halves of the horse but it was more than likely moulded at Bee mouldings, (maybe Alldridge Plastics). I remember working out the tail and the mane. We had a big “wigging” department for stitching hair (nylon filaments in to soft PVC dolls heads) so for the mane we had a strip of PVC that girls would stitch the hair into. The mane was just a tress of hair but had a thick solid rubber washer over the end to stop it being pulled from the horse. It was a devil of a job to assemble because the two halves had to be glued together trapping the mane and tail. Of course, the white flash was spray painted using a spray mask that didn’t quite meet the plastic to get the fuzziness. I notice on the 40th the white flash has a hard edge. We had a big spraying department because of all the dolls that needed blusher on the cheeks or maybe mask sprayed eyes. If you went in the factory you would see hundreds of horses lined up waiting for the glue to set before packing out on the assembly line.

A bit later I came across a process for connecting two plastic mouldings without using screws or glue, called hot-plate welding. The process involved a “plate” with heating elements inside and above and below a nest profiled to the shape of the mouldings. After the mouldings are positioned in the nests they would automatically move up and down to the hotplate which would melt the plastic around the joint line. The hotplate moves laterally away and the mouldings carry on to meet and the molten plastic fuses together. I suggested to Bill that we first use the process for joining the halves of the turret on the Scorpion tank because the joint line was flat. He decided to use it for the horse which turned out to be a night'mare' to use a pun. As you know the joint line on the horse is not flat so the company had to profile the hotplate to fit and match the profile of the horse joint line. We also had the added problem of inserting the tail and the mane during the strict cycle. They produced many different profiled hotplates and we spent hours to try and get the process to work but eventually the idea was scrapped. The factory went back to the hand gluing, and we never did try it on the Scorpion.

The instructions and assembly drawings for the accoutrements on the horse you show were done by my own fair hand. I believe the artwork for the boxes were the work of Derek “Bun” Bown who went on to work for Dave Barnacle, then Dave took over when Bun left.

For the Indian pony we considered spraying white patches to make it more authentic but I think costs prohibited that. The 17th and 21st Lancer on the horse which in my view must be the best image of Action Man. Bill and I visited the regimental museum at Belvoir Castle to get the uniform for that outfit and we were entertained and shown around by the Duke of Rutland. We couldn’t get the lance in the car so we sent Brian Turner over in a van to collect everything. We should have moulded that lance (in two halves) in a better material such as acetal. That applies to the bit, but we were dealing with Hong Kong before we even had a fax machine I reckon. Bill used to go over there twice a year, spring/early summer to take designs and autumn to approve, whilst I held the fort. So, I can blame him for not specifying materials correctly!" 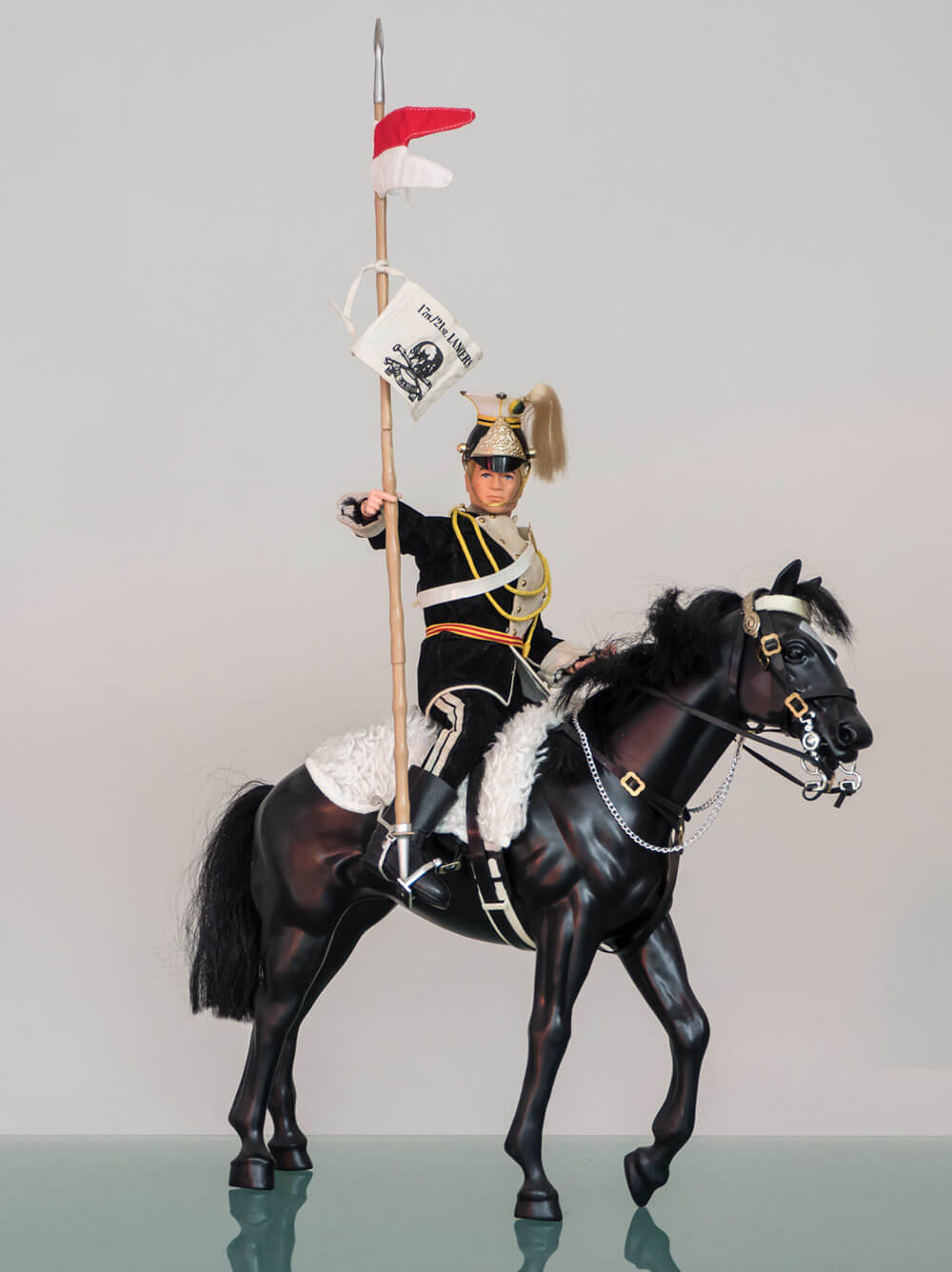 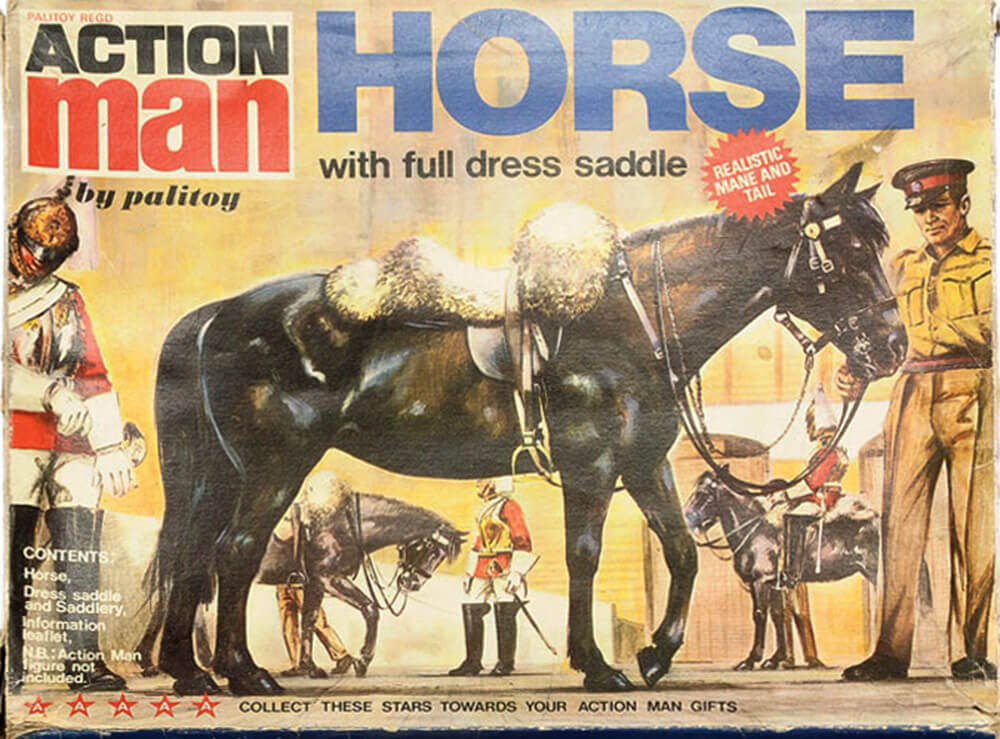